The month of October is dedicated to shining a light on many disabilities and medical conditions. We hope this helps you understand and advocate for your friends and family members who have or know someone who has a disability.

Down Syndrome Awareness Month is a chance to spread awareness, advocacy, and inclusion throughout the community. During October, we celebrate individuals with Down syndrome and make people aware of their abilities and accomplishments. We get the chance to celebrate their abilities, rather than their disability.

Down syndrome occurs when an individual has a full or partial extra copy of chromosome 21. A few of the common physical traits of Down syndrome are low muscle tone, small stature, an upward slant to the eyes, and a single deep crease across the center of the palm. According to the Centers for Disease Control and Prevention, approximately one in 700 babies in the United States is born with Down syndrome, making it the most common chromosomal condition.

Here are a few tips on the preferred language when speaking about or with a person with Down syndrome: 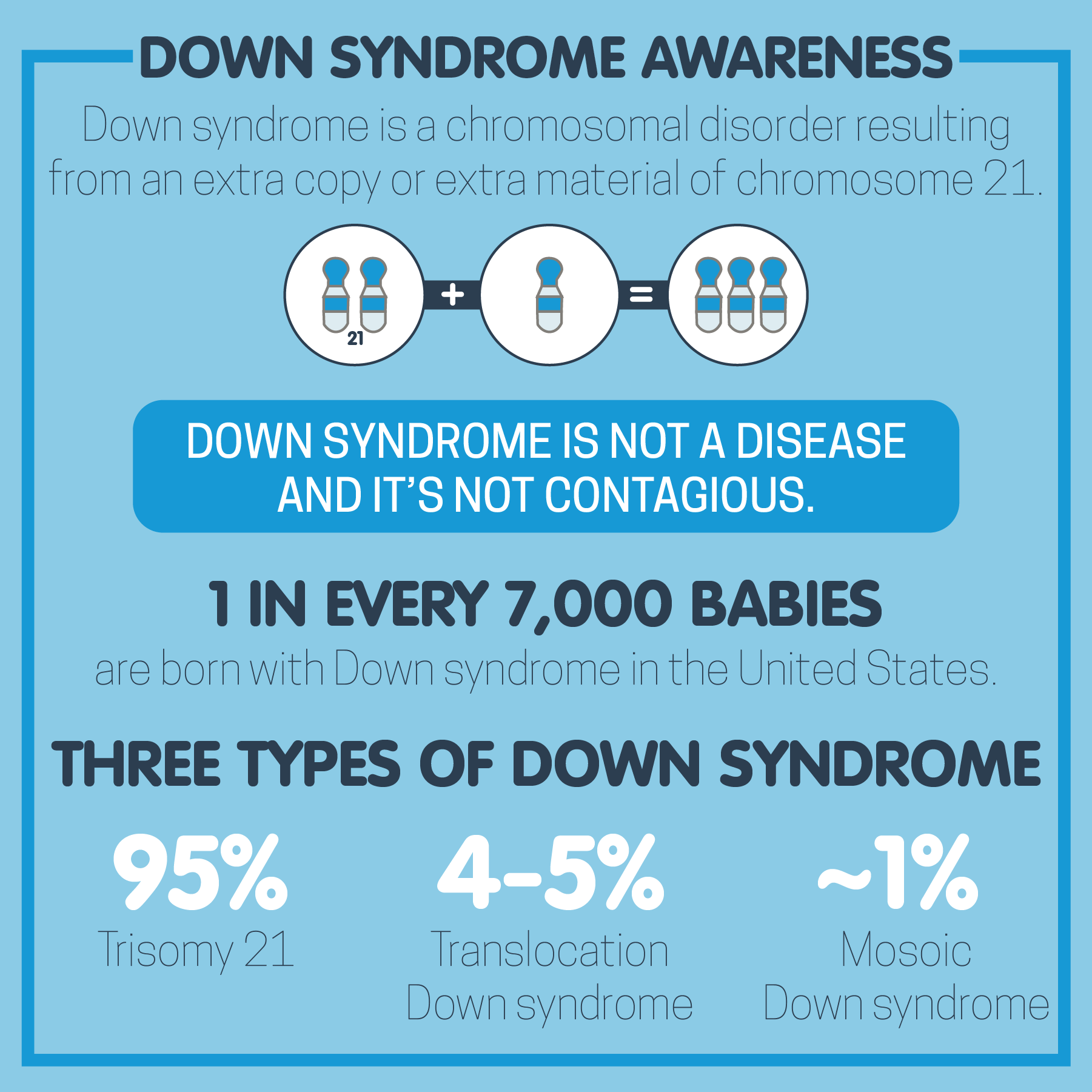 World Cerebral Palsy Day is a movement of people with Cerebral Palsy and their families, and the organizations that support them, in more than 75 countries. The vision of this day is to ensure that children and adults with Cerebral Palsy (CP) have the same rights, access, and opportunities as anyone else in our society.

There are 17 million people across the world living with CP. Another 350 million people are closely connected to a child or adult with CP. It is the most common physical disability in childhood. CP is a permanent disability that affects movement. Its impact can range from weakness in one hand to almost a complete lack of voluntary movement.

CP is a complex disability. 1 in 4 children with CP cannot talk. 1 in 4 cannot walk. 1 in 2 has an intellectual disability. 1 in 4 has epilepsy. CP is a lifelong disability and there is no cure. Cerebral Palsy can also lead to other muscular issues, such as hip dysplasia or scoliosis. Fortunately, these can be treated with the help of an orthopedic physician to make living with Cerebral Palsy easier. You can learn more about this at Medical City Children’s Orthopedics & Spine Specialists. 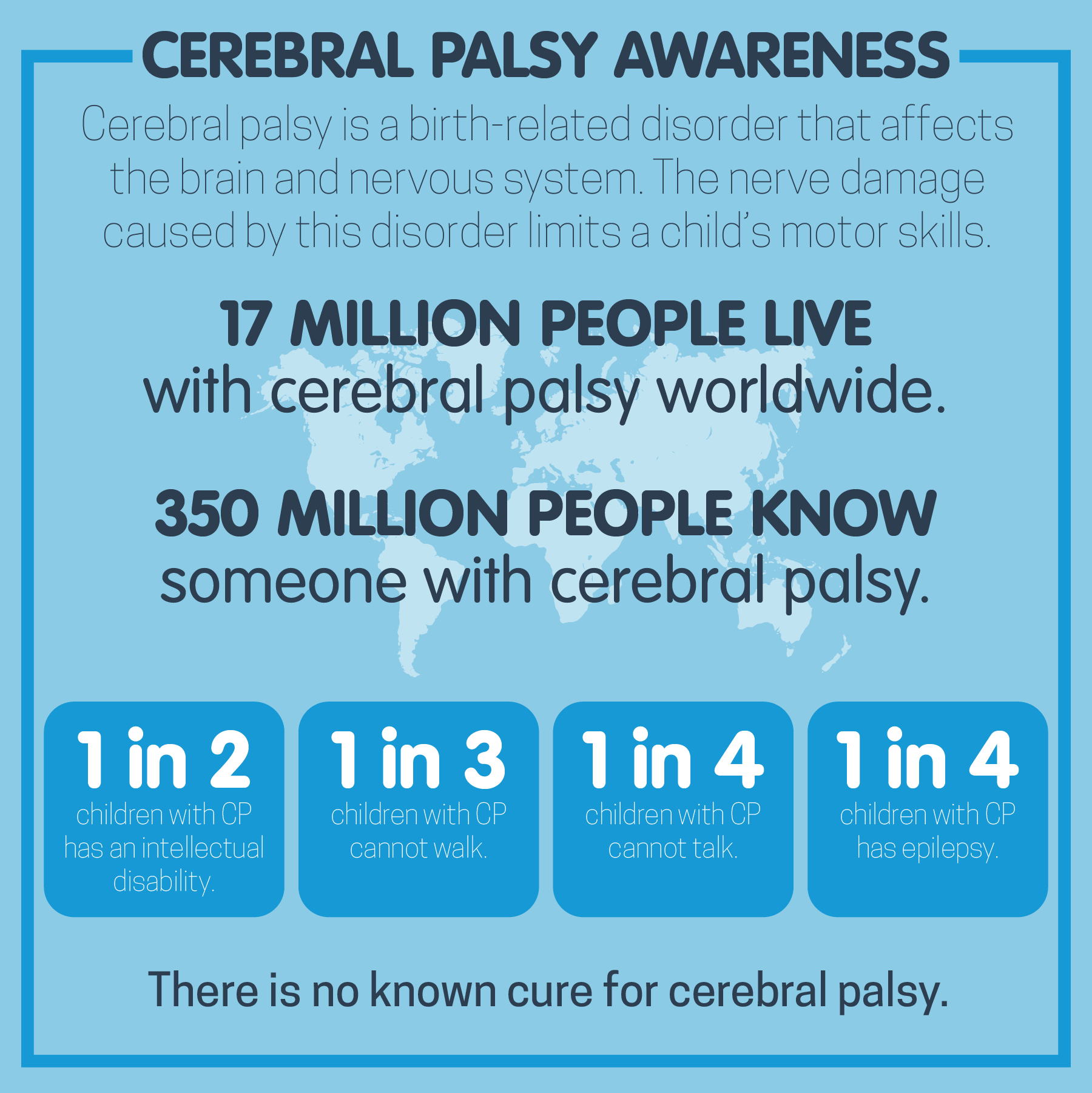 World Mental Health Day celebrates awareness for the global community in an empathetic way, with a unifying voice, helping those feel hopeful by empowering them to take action and to create lasting change. This year for World Mental Health Day, the main theme is “suicide prevention.” Somebody somewhere in the world dies of suicide every forty seconds. Ninety percent of these individuals have a clinically diagnosable mental illness. One-third of suicides occur in young people, and is the leading cause of death between ages 15 to 29, and is the second most common cause of death in women between 15 and 19 years old.

Although 1 in 5 children has a diagnosable mental health problem, nearly two-thirds of them get little to no help. Without treatment, children with mental health issues are at increased risk of school failure, contact with the criminal justice system, dependence on social services, and even suicide. Without treatment, these problems could continue into adulthood, causing them further problems down the line. Unfortunately, many adults find it hard to seek out a treatment plan that works, unless you decide to look at these Medterra reviews to learn how CBD oil could potentially provide a lifeline. And for many people it does. But diagnosing the problem and finding the relevant help as soon as possible will be in everyone’s best interest, as it could help to prevent suicide.

Studies show that suicide attempts among young people may be based on long-standing problems triggered by a specific event. Suicidal adolescents may view a temporary situation as a permanent condition. Feelings of anger and resentment combined with exaggerated guilt can lead to impulsive, self-destructive acts.

Four out of five teens who attempt suicide have given clear warnings. Pay attention to these warning signs: 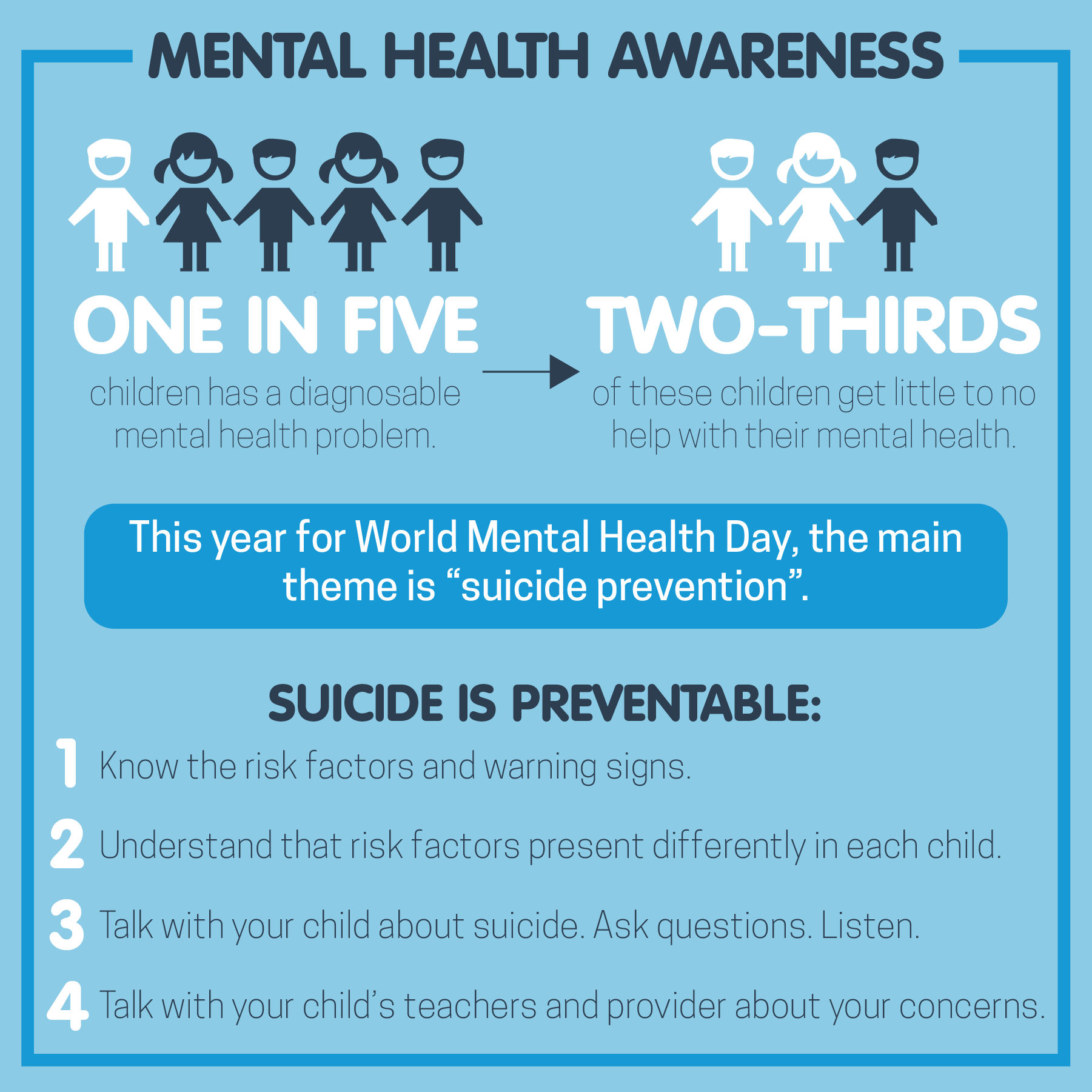 National Physical Therapy Month is an opportunity to raise awareness of the benefits of physical therapy. Physical therapy is a popular form of treatment that is very effective at treating disease, injury, or disability. It is a very good alternative to traditional surgery or drugs, as it relies on methods such as massage, heat treatment, and exercise.

Physical therapists can be found in many different settings- including outpatient clinics, private clinics, hospitals, schools, and the emergency room- and there are also many different types of physical therapy. Some examples include orthopedic, acute care, post-operative care, cardiovascular, pulmonary rehab, neurologic rehabilitation, and wound care. Although many people think physical therapists can only rehabilitate injuries, they actually work to prevent injuries as well by educating patients on safer movements and motions If helping and aiding patients that struggle with physical symptoms is something that inspires you, maybe search for some physical therapy jobs near me, these positions can offer massive flexibility considering the settings you’re able to find PT workers in. 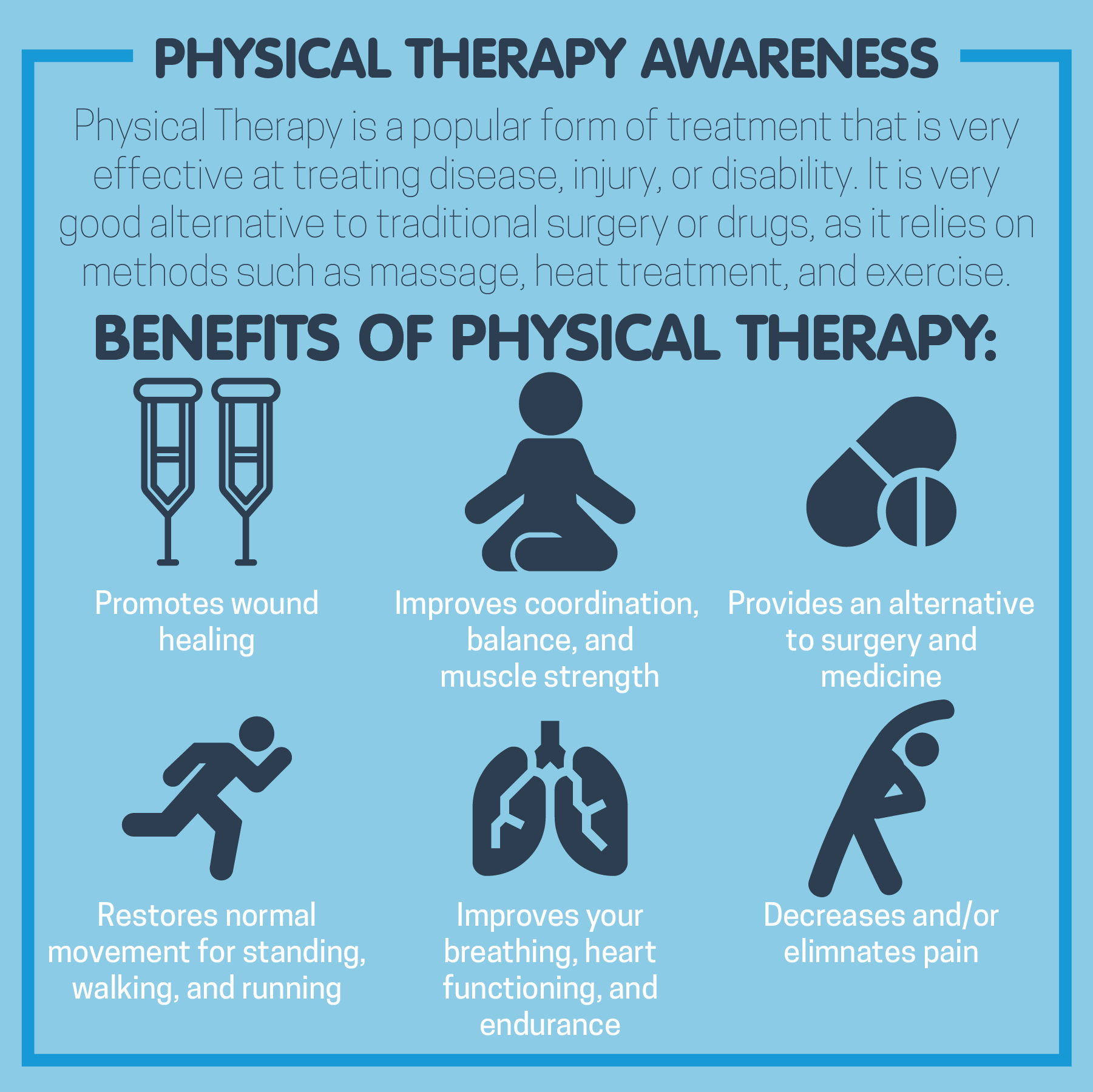 SIDS Awareness Month exists to provide parents and families with more information about how to reduce the risk of SIDS. According to the Centers for Disease Control and Prevention (CDC), approximately 3,500 infants died in the United States in 2014 from SIDS. SIDS is the sudden death of an infant less than 1-year old that cannot be explained after a thorough investigation that includes a complete autopsy, examination of the death scene, and a review of the medical history. This is the most commonly occurring unexplained death of infants.

Teaching points for prenatal or postpartum education on safe sleep include: 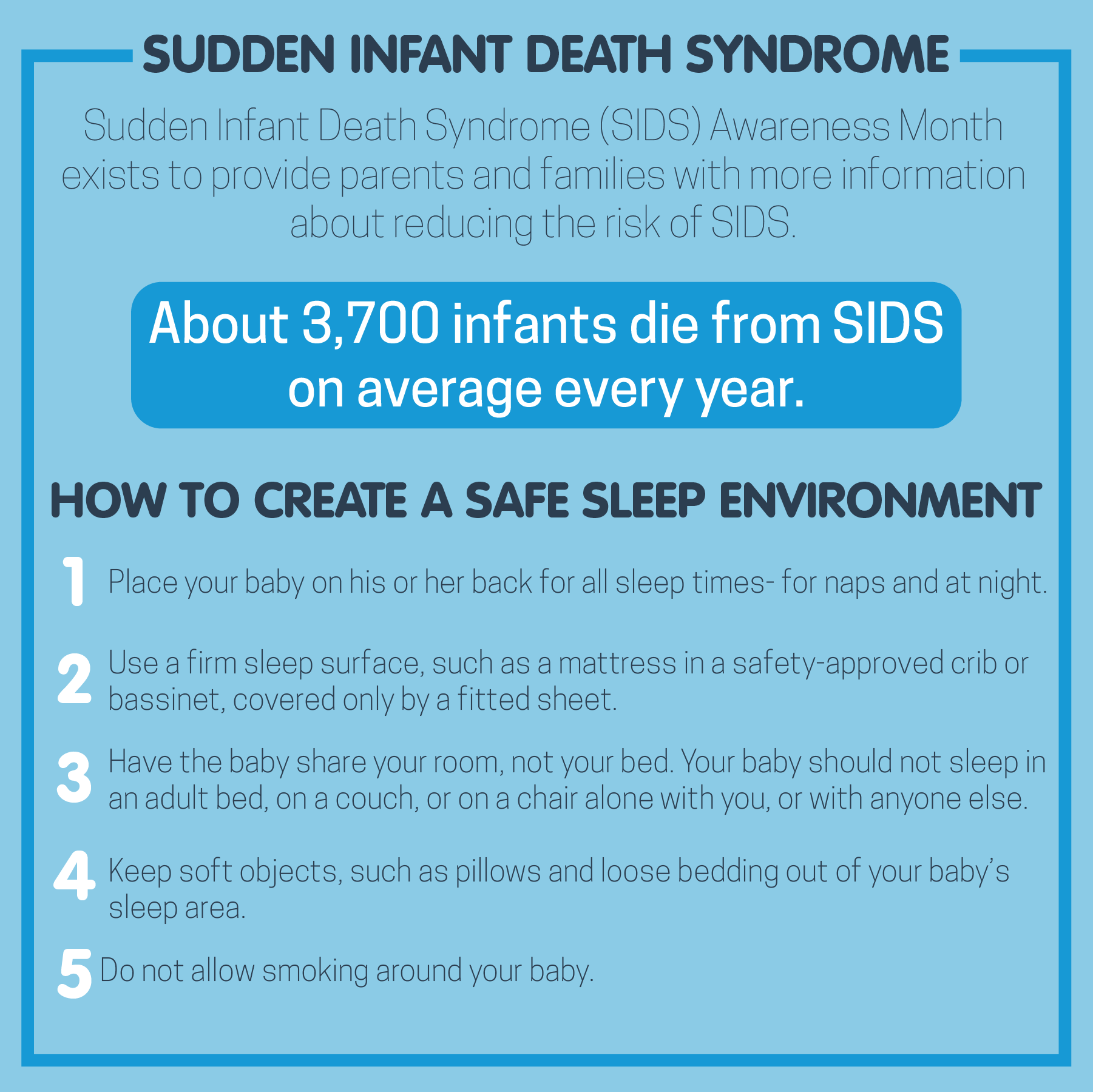 Spina Bifida Awareness Month is a time to celebrate the hundreds of thousands of people living with Spina Bifida. Spina bifida means “split spine.” It happens when a baby is in the womb and the spinal column does not close all of the way. Every day, about eight babies born in the United States have spina bifida or a similar birth defect of the brain and spine. Spina bifida is often referred to as the “snowflake condition” as no two people are affected in the same way.

Spina bifida is the most common permanently disabling birth defect compatible with life. Over 1,600 babies are born with spina bifida every year in the United States. Spina bifida occurs in the first 28 days of pregnancy, often before a woman even knows she’s pregnant. Children with spina bifida have medical expenditures 13 times greater than those without spina bifida. Along with many of the other disabilities overviewed in this page, people with spina bifida often tend to be unable to work throughout their lives, meaning their income will more than likely be acquired through Social Security disability benefits. If you’d like to learn more about disability benefits head on over to a webpage such as Crest SSD or other similar SSD advocacy services. 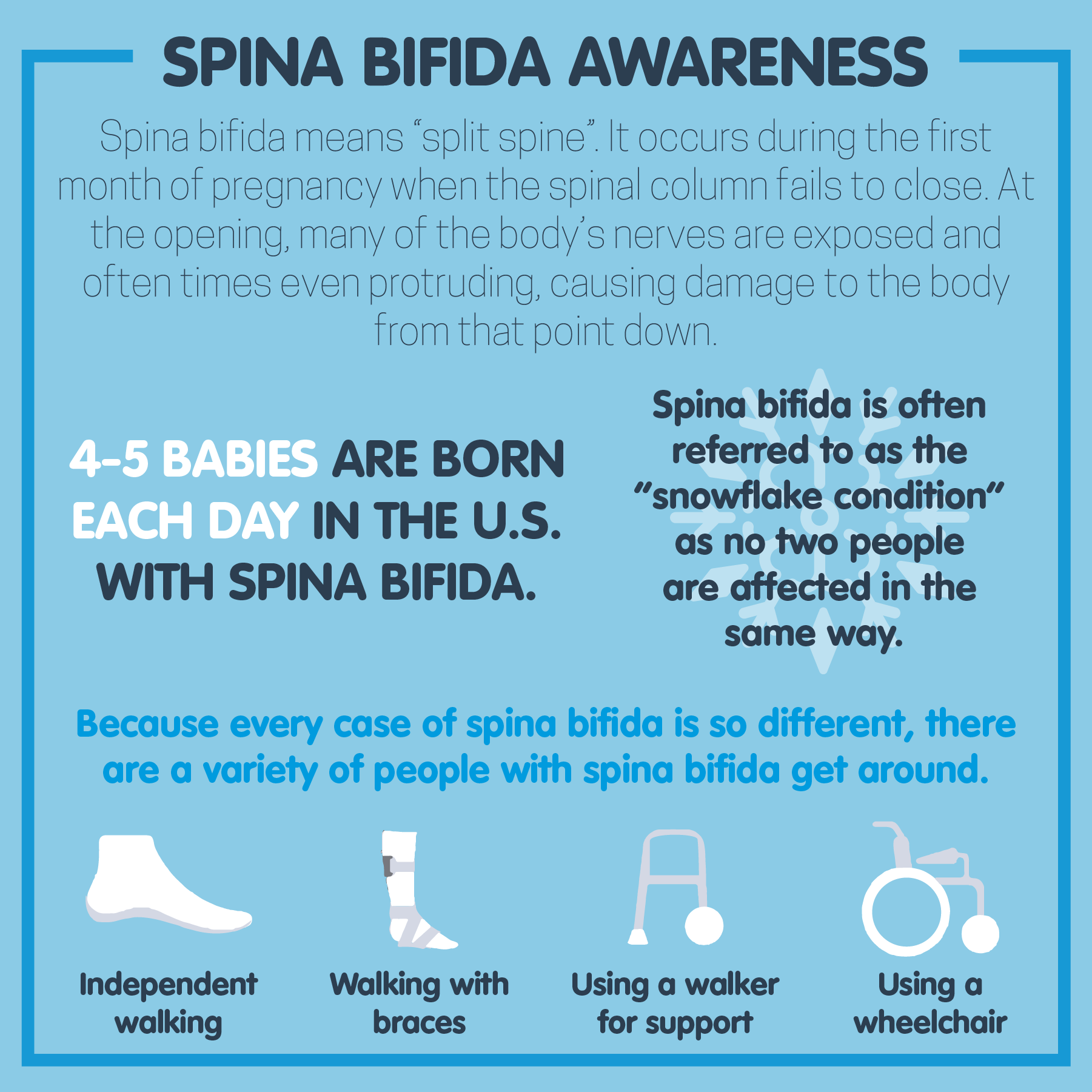 Attention-Deficit/Hyperactivity Disorder (ADHD) is a neurodevelopmental disorder affecting both children and adults. It is described as a persistent or ongoing pattern of inattention and/or hyperactivity-impulsivity that gets in the way of daily life or typical development. Individuals with ADHD may also have difficulties with maintaining attention, executive function (or the brain’s ability to begin an activity, organize itself, and manage tasks), and working memory.

In 2011, the Centers for Disease Control and Prevention reported that the percentage of children in the United States who have ever been diagnosed with ADHD is now 9.5%. Boys are diagnosed two to three times as often as girls.

Currently, available treatments focus on reducing the symptoms of ADHD and improving functioning. Treatments include medication, various types of psychotherapy, behavioral interventions, education or training, and educational support. Usually, a person with ADHD receives a combination of treatments. 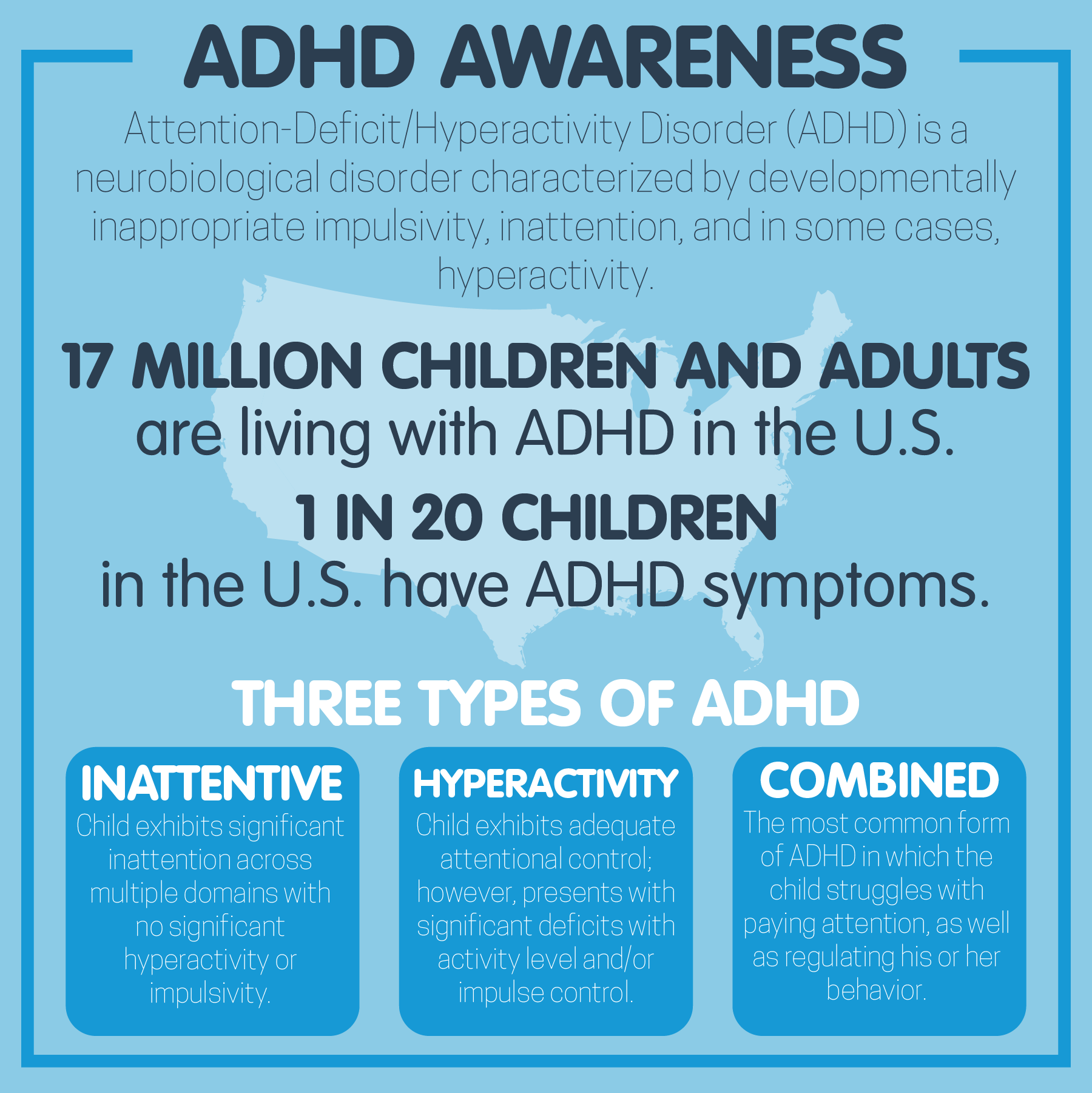 The goal of Rett Syndrome Awareness Month is to bring about awareness for Rett syndrome, while also striving to find a treatment and a cure. It is a unique postnatal neurological disorder that is first recognized in infancy and seen almost always in girls but can be rarely seen in boys. It is often misdiagnosed as autism, cerebral palsy, or a non-specific developmental delay. Rett syndrome can occur in all racial and ethnic groups and is not a degenerative disorder. Throughout a person’s life, Rett syndrome can cause problems in brain function that are responsible for cognitive, sensory, emotional, motor, and autonomic function. These can include learning, speech, sensory sensations, mood, movement, breathing, cardiac function, and even chewing, swallowing, and digestion.

Rett syndrome is caused by a single gene mutation that leads to underproduction of an important brain protein. It is the leading genetic cause of severe impairment of girls- most cannot speak, walk, or use their hands. Despite their physical disabilities, girls with Rett syndrome are believed to be functioning mentally at a much higher level than previously thought. Rett syndrome is a potentially reversible disorder. Research has proven once protein levels are back to normal levels, symptoms subside. 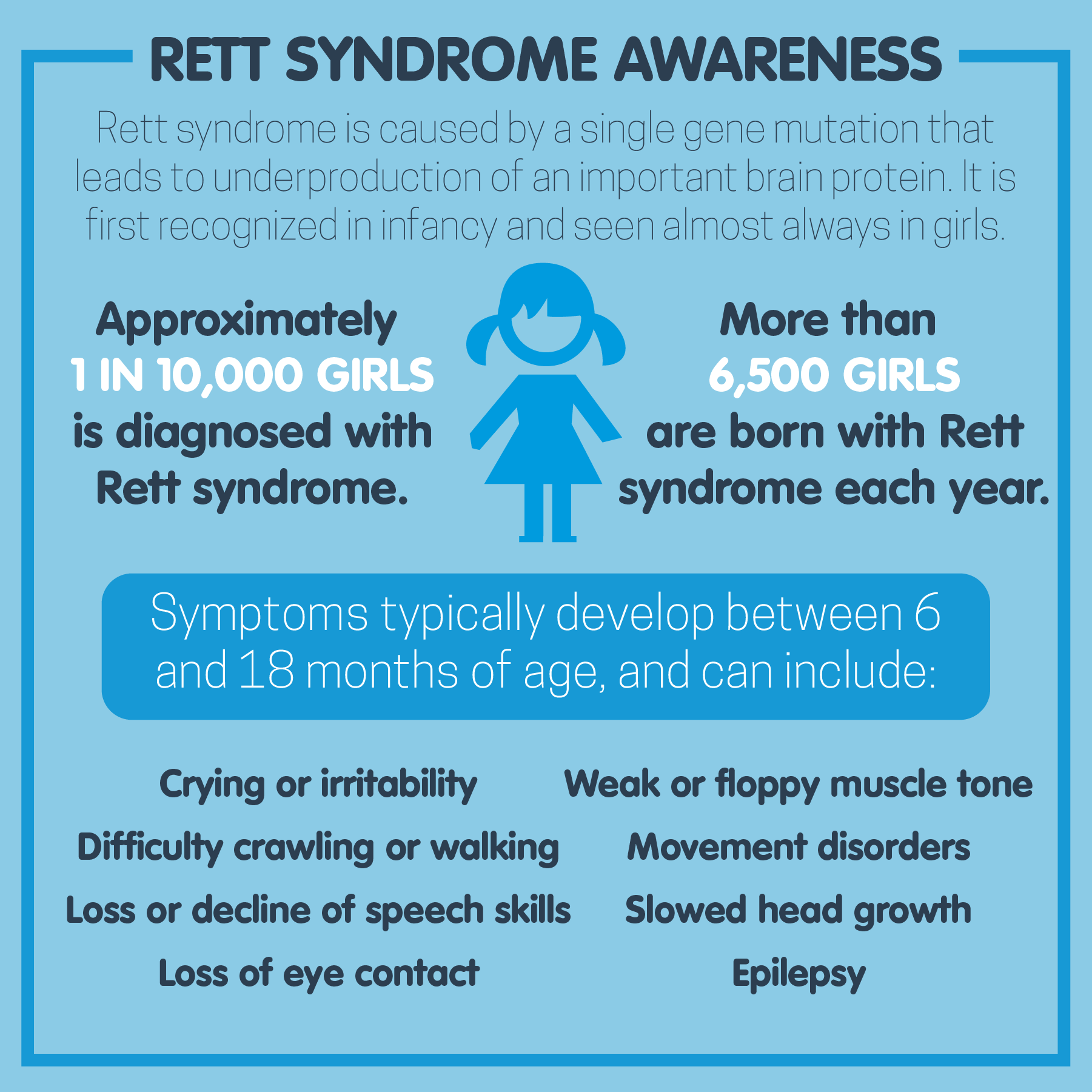