Imagine having a birthday and not being able to indulge in your own cake. For enCourage kid KeVaughn (KE), that is his reality. KE has celebrated all of his 14 birthdays without cake, as his illness, Eosinophilic Gastrointestinal Disorder (EGID), causes his body to reject food. Because of this, KE gets the majority of his nourishment through a tube that flows directly from a backpack into his stomach. 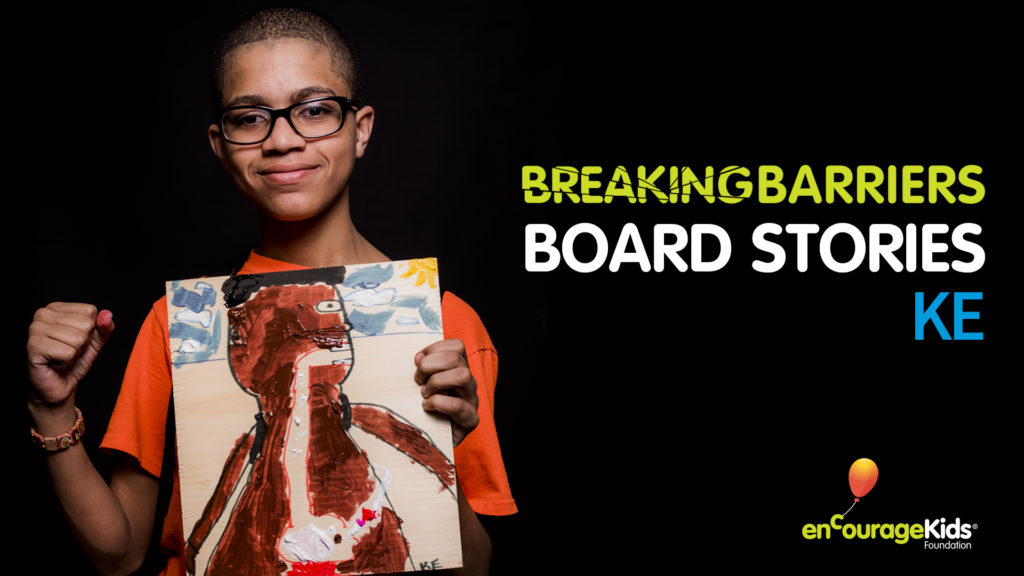 For most young men, this would be devastating! No cake? No junk food like pizza? Well, not for KE! “I don’t need pizza or birthday cake!” he says. In fact, despite having his feeding tube, along with several other diagnosed illnesses, including irritable bowel syndrome, respiratory airway disease, hiatal hernia and anemia, KE says there’s nothing he can’t do and no barrier that he can’t break! 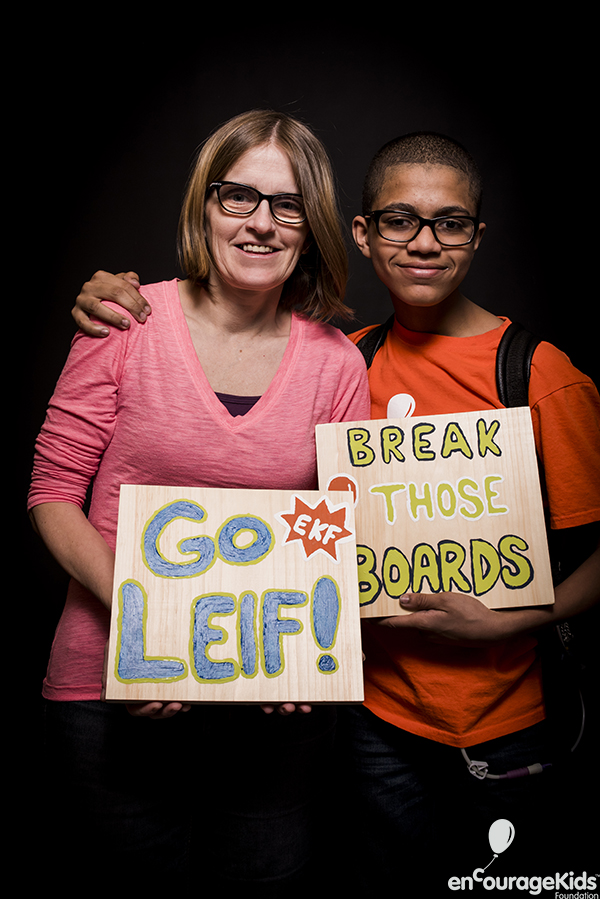 KE and mom, Colleen, will be cheering on Leif on May 11th

It is that bravery and can-do attitude that defines KE. Although he was officially diagnosed with EGID at age two, he spent much of the time before that visiting doctors, specialists and undergoing scary medical procedures.

He currently travels to Children’s Hospital of Philadelphia approximately every two months for treatments to ward off the symptoms of his disease, which include stomach pain, nausea, vomiting, leg pain, bloating and anemia. Attached to 3 tubes by IV pole every night, KE must take over 14 different medications and undergo multiple breathing treatments daily.

“When he was first diagnosed he was only drinking a formula by mouth and allowed to chew ice cubes – nothing else. It was very hard to explain to a baby why all food and drinks were gone,” shared mom, Colleen. “Now he has more food in his diet, but he’s on a trial medication in order to have those foods. There’s not much research or awareness about his rare disorder, so we don’t know the long term effects or outcomes.”

But through it all, KE is all smiles. When we asked him what his biggest barrier was, he struggled to find an answer. “If I didn’t have my disorders, I wouldn’t be a part of enCourage Kids,” KE explained. “I’m happy with them. They are a gift. They are a part of my personality.” 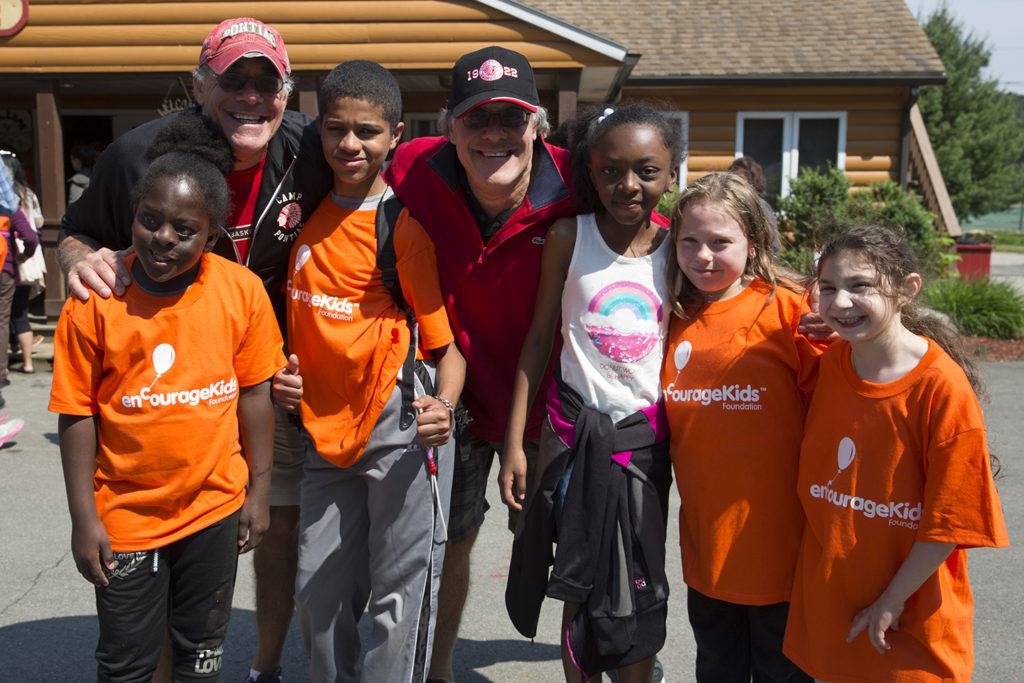 KE and friends at our annual weekend at Camp Pontiac

While his barrier board visually depicts his rare medical condition, it also represents the struggles KE endures on a daily basis and the strength necessary to overcome them.

“We are a family here, we all help each other through our barriers,” Colleen expressed. “My son has been able to make friends who actually understand him, instead of looking at him strangely.”

Through enCourage Kids, KE and his mom have found an extended family. KE loves attending Escapes events, particularly if enCourage Kids teen ambassador Carly Rose Sonenclar will be in attendance! KE is Carly’s self-proclaimed “number one fan” and the two have become best friends. He loves to listen to her music and attend her shows any chance he gets. 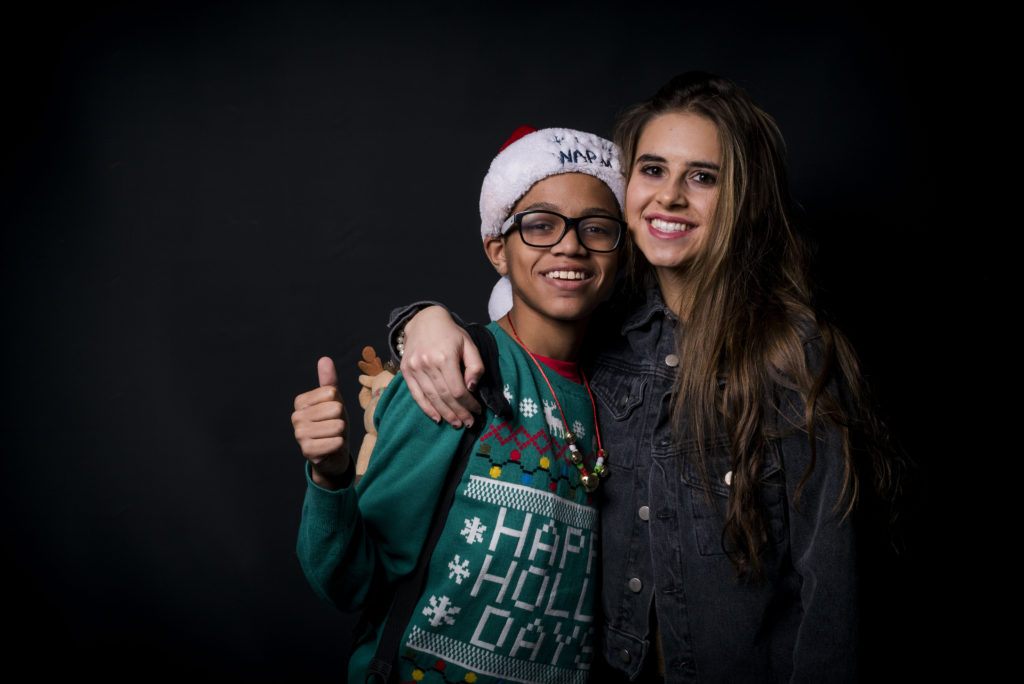 Some of his other favorite activities include making art, break dancing, and hanging with his enCourage Kids best friend, Briana. Recently, Briana spent the day messaging with KE to help him complete a difficult homework assignment. When he thanked her, Briana texted back “you’re welcome little bro!’ – proving that we truly are a family at enCourage Kids.

Like all of our children, KE goes through so much on a daily basis and faces it all with courage and strength that surpasses some adults. “enCourage Kids helps heals many children like me,” KE shared. “They help us break our barriers!” 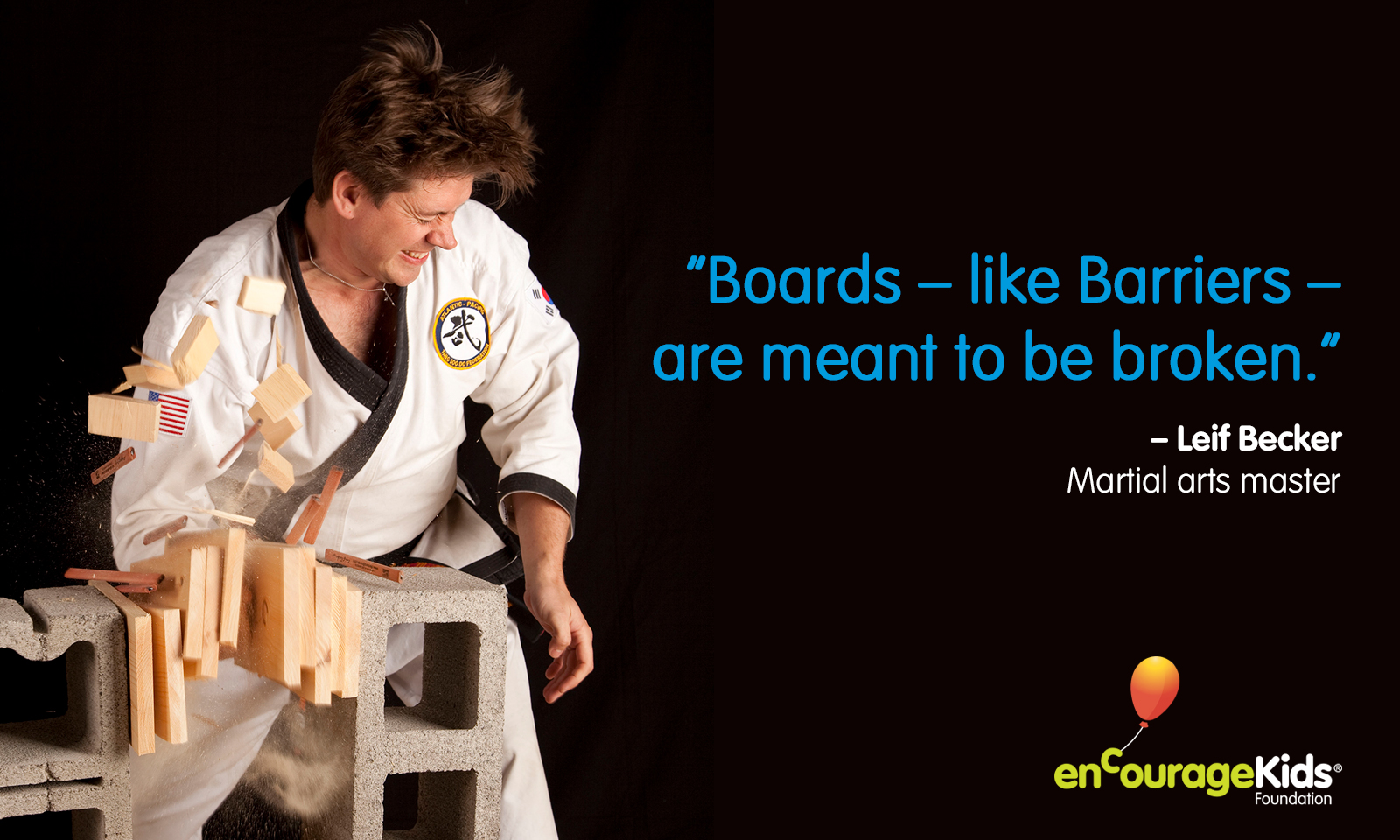