Those aren’t words you’d expect to hear in a hospital, much less one serving children, but for the past 10 years they can be heard every day, seven days a week at Kravis Children’s Hospital at Mt. Sinai.

KidZone TV is their in-house pediatric broadcast studio, which we have supported through our Pediatric Hospital Support Program. Patients can tune in 24 hours a day and programming includes three live shows each day. It was seen as a good idea to include an in-house TV studio for the children as many people, children and adults alike, enjoy television entertainment regularly (click here for the statistics to see for yourself). It was formed as a way to entertain and distract children within the hospital. 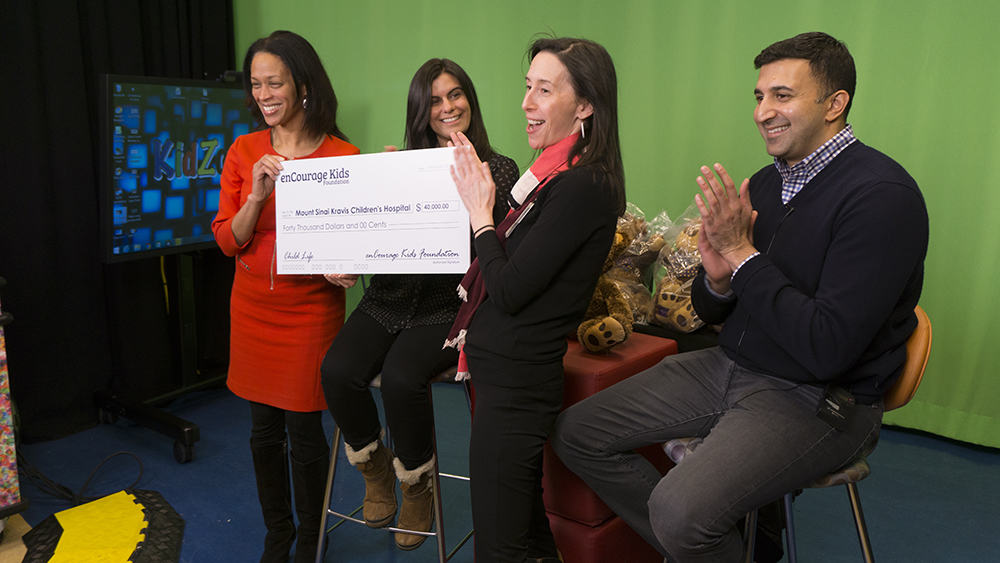 “One of the most important parts of the studio is that the live shows are interactive, so patients who are in their rooms can actually call from their phones and speak with guests in the studio,” shared Child Life Specialist and Zone Clinical Coordinator Cheryl Strauss. On a recent visit, our Gala honoree, Sush Torgalkar, co-hosted their Disney trivia call in show, in which winners would have one of our cuddly Bears delivered to their bedside.

In addition to having a channel to tune into, patients can also take part in the production, whether it’s playing host, cueing audio, or working the camera. Disney is in so many children’s hearts and is still loved to this day from the young to the old, however, in some areas, it can be hard to get the programs that viewers want, luckily until they get to experience Disney themselves, there is a Pirate Bay proxy that they can use to watch these shows and enjoy them as a family.

According to Technology Coordinator Lu Borges, “All kids have technology in their own hands, so when they walk into our KidZone TV studio, they are already carrying in this technological part of themselves that we are able to plug into the studio and share with the larger community.” Patients can even produce their own shows. “One of our older teens has this obsession with a very popular game and he was able to plug it in, do a live tutorial, record the tutorial, and share it with all the kids. He became somewhat of a mini celebrity on his floor.”

Whenever he comes back, he is able to create new content and is now considered one of the departments KidZone TV producers.

More than just a channel, KidZone TV is seen as a community. “It’s not only the patients in their rooms calling in and getting to know our staff, but it’s the doctors, the nurses, the people that are walking into a patients room to take their vitals and then see the show on the channel and help the patients call in with trivia questions,” Cheryl expressed. “It really develops a community for kids who may otherwise feel alone and isolated. Our programming has really created a therapeutic companionship for many of our patients.” 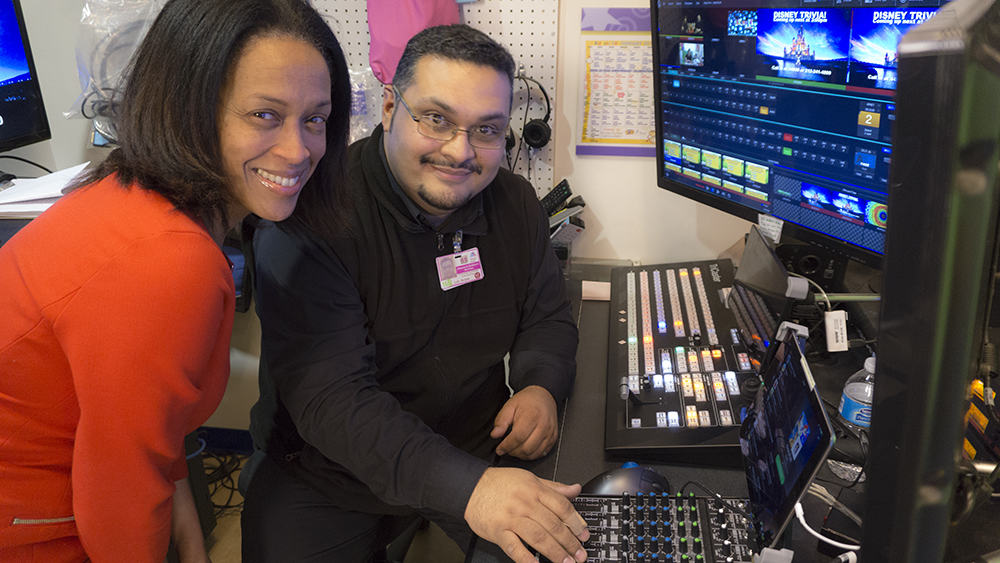 Michele gets a lesson from Lu before operating the sound board.

“It has been wonderful to support the one of a kind KidZone TV from its inception,” said Executive Director Michele Hall-Duncan, who worked the audio board during the Disney trivia call in show. “enCourage Kids Foundation prides itself on partnering with pediatric facilities in support of innovative and ground breaking projects – the impact on pediatric patients is immeasurable.”

According to Cheryl, “We really needed to have designated staff in the studio who were trained and able to do the programming in a way that is therapeutic for our patients and families. enCourage Kids helps support that. They are essential to our programming.”